In an industry full of ever-evolving technology and techniques, jargon gets banded about a lot. If you’re new to the industry or reaching out to a production company, you may end up wondering what on earth half of them mean. So we’ve put together this super handy glossary of commonly used terms, phrases and techniques.

Never be left scratching your head over terms like "talking heads" ever again. Take this handy glossary with you on the go to refer to whenever needed. 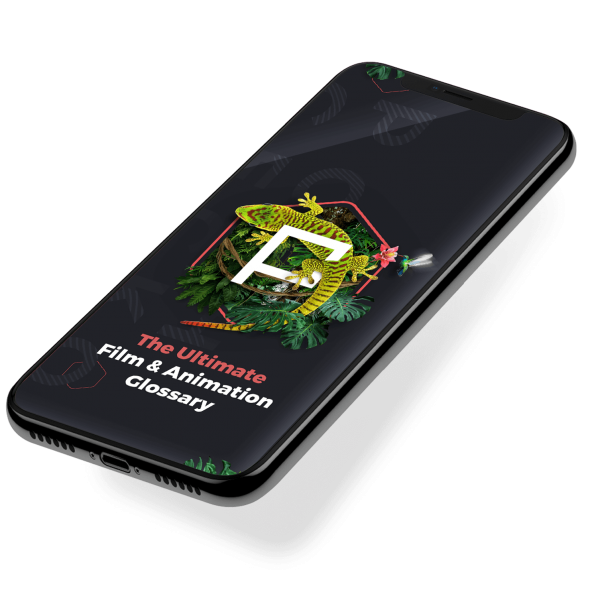 You're nearly there! Fill in the details below for your free content.

The following email providers are not accepted: gmail, hotmail, yahoo. Please use a valid company email.

2D - Two dimensional. 2D animation refers to any images which sit flat on the screen.

3D - Three dimensional. Some pretty clever animation which is created using the Z, X and Y axis, creating a visual illusion of depth.

360 - 360-degree video. You know those awesome videos you get on Facebook where you can swivel around an entire scene? This is that. They allow you to view the shot from every angle rather than a fixed frame. This works great within the travel, construction and interior sectors.

Amends - Changes to be made to the video. We’ll always give you the opportunity to come back to us with amends to your first draft. This could include removing a frame or changing the background music.

Animatic - A rough draft of the video or one sequence used to test that everyone involved is on board with the direction of the video. Essentially an animated storyboard, not always needed.

Animation - Modern day animation is mainly created with computer-generated imagery (CGI). Varying styles of animation include 2D, 3D and photorealism. Check out a range of our animation projects.

Audio mix - The balancing of audio levels to ensure that the video's music isn’t competing with narrative or sound effects. This is often done at the end of the project.

After Effects - Adobe software used for animation or to create awesome visual effects.

Assembly - Nope, no a boring half an hour of listening to teachers. Assembly in our world is essentially the stage where we’ll put the shots in the right order. This is done at the very beginning of editing the raw footage.

Assets - Anything and everything included in a video, from music and voiceover to graphics and video rushes.

B-Cam - A secondary camera, often used to give another angle for the editor to cut to during the editing stage. You’ll probably hear us refer to the footage captured on this camera as the b-roll.

Call Sheet - The document that provides the cast and crew with all of the shoot information. This can include location, equipment, contact details, risk assessment and any other relevant information.

Camera Operator - Literally the person who is responsible for operating the camera. This is a skilled member of the team who is experienced at using cameras, from DSLRs to professional cameras such as REDs, Agri Alexas and more.

Captions - Often refers to subtitles or supportive text. Not all videos will need these, however, they’re useful for platforms where video autoplays in mute, like Facebook.

Clearcast - The UK organisation which approves most British television advertising. They check ads against the UK Code of Broadcast Advertising (BCAP Code) which outlines what isn’t permitted. Not the Advertising Standard Authority.

Development - An early stage of production during which we’ll work together to develop and agree on the story, theme and style of video.

Director - The person who directs the making of the video. They control the video’s artistic and dramatic aspects and visualises the screen which guides the technical crew and actors to fulfil the vision.

Director’s Cut - The first fully-edited version of a film prior to any intervention from outside parties.

DoP - Director of Photography. Often a camera operator too. They’ll work alongside the director and are responsible for the look, lighting and composition of the film.

Edit - One version of your video. There may be several different edits of your video if you're using it within a multi-channel marketing campaign which is utilising platforms such as Facebook, Instagram or YouTube. Edits could also be required if the video is going to be used internationally, therefore requiring translations.

Editor - The editor works with the director to decide on the best shots, develop an overarching narrative and assemble your video.

Export - When the film has been edited it exists as an exported video file such as ProRes or H264.

Foley - Foley is sound that has been recorded after the shoot to sound like the image seen on screen.

Frame rate - This refers to the number of frames in one second. High frame rates can be used to create slow motion in film or a smoother animation style.

Gimbal - A gimbal ensures that the motion of the camera is stabilised, producing smoother footage than handheld filming.

Grade - Raw video footage colouring is flat and dull. The look will vary in different locations, indoors or outside and at different times of the day. Towards the end of editing, we colour grade the full video. The type of grade will depend on the desired feel of the video.

Graphic - This refers to static graphic elements within a video, as opposed to moving graphics which we would refer to as motion graphics or animation.

Grip - The person responsible for the set-up, adjustment and maintenance of production equipment on the set. They will work closely with the DoP and camera crew during the shoot. Mainly needed on bigger shoots.

HD - High Definition. Standard for all modern screens, this includes content with 1080 horizontal lines of resolution. We almost always shoot in 4K, this future-proofs your content.

Lower Thirds - Any graphic or animation placed within the lower third of the video frame. A common example is a name or occupation card in talking heads and interviews.

Motion graphics - This could be moving titles, characters, logos or annotations, basically any computer-generated graphic that moves. Different types of graphics will have different development timescales, for example, character animations are often complex and require longer development and animation time.

Native advertising - Advertising content which resembles the form and function of the media format in which they appear. Often found on social media feeds or as recommended content on a web page.

Overlay - This can refer to anything that layers above the video, for example, titles or graphics.

Pacing - The speed and timing of a finished video. If the raw footage feels too fast or slow, the pacing can be adjusted during the post-production process.

Post-production - Following filming, post-production is the stage in which the raw footage captured during shoots is edited, graded, sound mixed and finished to give you the final video.

Pre-production - Before filming begins, pre-production is when we’ll develop the video concept, write a treatment and/or script, storyboard and (if film) explore things like location, actors and any other specialists that may be needed on set. We can take care of this entire process for you.

Film Producer - Logistically implements the creative idea. This could be booking the shoot location, actors, make up artists and everything in between. They’ll be there on the day to coordinate all of these elements. The film producer will also (importantly!) ensure that the project in keeping within budget.

ProRes - A high-quality video format used for editing and exporting. Masters are often delivered in ProRes.

Recce - Short for ‘reconnaissance’ (fancy huh?!). One or more of our film team will visit the shoot location(s) to check factors such as lighting, access and parking. This isn’t always necessary but can speed up the shoot day if time is of the essence.

Rotoscoping - An animation technique in which animators trace over live-action film movement, frame by frame.

Rough cut - Basically a first draft of your video. Often features sample music and voiceover. If relevant, placeholder graphics may also be used to give you a first-look. We welcome feedback at this stage before proceeding into the next steps of editing.

Script - The original text containing all the video information, not just dialogue as most people believe. In animation, the script contains all of the location descriptions, dialogue, time and more.

Sequence - A short section of a video. A video generally consists of a series of sequences.

SFX - Sound effects that have been added to the video during editing, often to support the visuals. They can have a huge impact on the overall feel of the video.

Showreel - A short promotional video showcasing the work of an individual or agency.

Steadicam - A brand of camera stabiliser which mechanically isolates the camera operator’s movement, creating smooth tracking shots without the shake that comes with handheld filming.

Stock shot - Previously recorded footage, such as footage of historical events, which can be edited into the film.

Storyboard - A shot-by-shot representation of what the scenes in your video will look like.

Style frame - A snapshot of a finished frame, as it would look within the final animation. Helps to determine the overall look for an animation video.

Stop-motion - A technique used within animation in which objects are filmed frame-by-frame and are manually altered slightly in between each frame. When all the frames are then played in sequence it produces the illusion of movement. Old school but still looks cool.

Talking heads - A category of video (often corporate videos) which are shot with the person talking directly into the camera as if addressing the viewer personally.

Thumbnail - A single image used to summarise what the video is about. You’ll have seen these all over digital media.

Title safe - A designated area inside a video frame in which text can be placed without any possibility of it disappearing from screen, even if the monitor isn’t set up correctly. This is extremely important in broadcast.

Tracking shot - Shots that move parallel to the action. Creating these shots usually involves mounting the camera onto a dolly and moving it along the dolly track.

Transition - Post-production technique used to connect one shot to another.

Treatment - The overall creative vision for the project. This will include details on production techniques, along with the specification of other elements which will ultimately help us to answer the brief in the best way possible.

TVC - Television commercial. Played within a break on a commercial TV channel.

Video frame - A still image taken from the video. Typically, one second of footage is made up of 25 frames.

Voiceover - Narration and commentary that accompanies the video. We will often provide a placeholder voiceover during the early stages of production. We will then source a handpicked professional voiceover which matches the style and feel of your video.